This is What We Came For: Part 4

There’s nothing quite like jumping into a waterfall, falling deep into clear blue water, and then bobbing up to find yourself in the roaring center of a circle of white foam….

Our third day on the Old Telegraph Track was adventure-filled, as we broke camp with a quick breakfast and the last of our locally grown Black Mountain Blend hand-ground coffee – probably our last taste of this indulgence for a while as each “hand ground” cup is ground by us, it takes about ten minutes of grinding per cup, and the kids have finally realized it’s actually a chore and not a game! Lake will have forearms like a little toddler Popeye by Christmas if I can only get him back on coffee grinding as a morning activity!

We headed out with our new friends straight for the famous combo of Twin Falls and Elliot Falls.  These falls were a big part of why we made the trip and they did not disappoint.  The drive was relatively short and the track not too challenging other than a long murky ford that looked nasty but everyone seems to survive; we also had to cross back through Canal Creek and there were a few ruts and dips but nothing major to worry about. 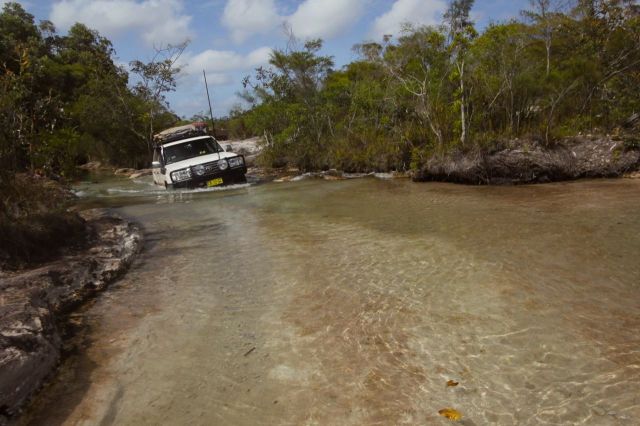 We decided to leave the camper folded up at our campsite and would return later with Cave Lion to pick it up.  Everyone had heard that Twin Falls was a beautiful spot, and we had intended to spend a few hours there in the morning there and then move on.  But when we arrived we were blown away by how beautiful both spots were, and since both the high tourist season and the Queensland school holidays were over, we nearly had these iconic natural beauties to ourselves.

Elliot Falls was majestic, and so calm at the top you could walk right up to the edge and peer down what I reckon was a 15-ft drop to the pools of clear blue water below.   After checking out Eliot Falls we headed over to Twin Falls with Lake and Finn, leaving Cameron, Leif and Craig at Elliot.  Twin Falls, located where the Elliot River and Canal Creek meet, was a short walk away and very picturesque, with two sets of gentle waterfalls, one above the other, both accessible by an easy walk. 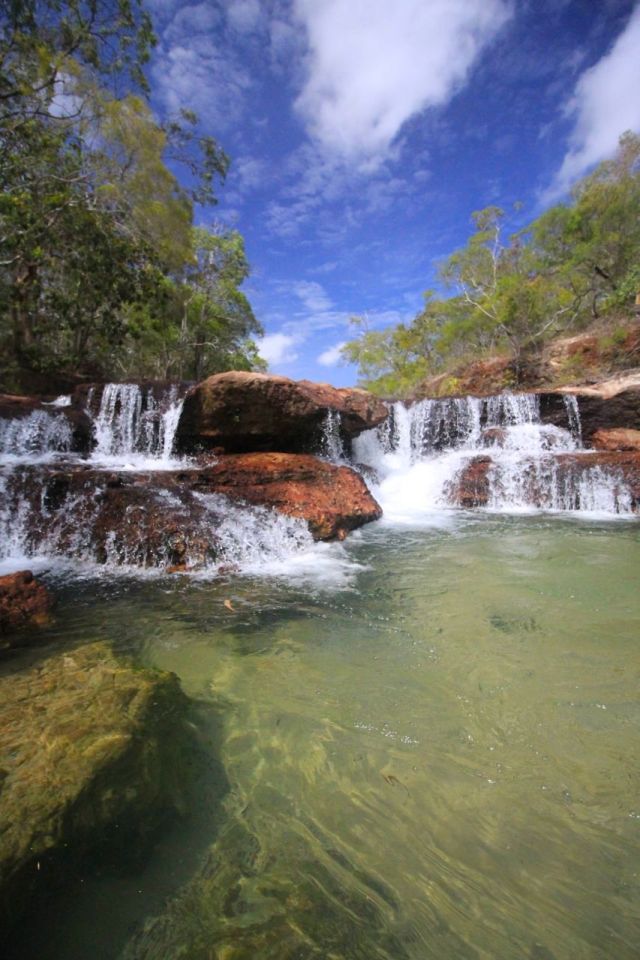 This was perfect for swimming with Lake and Finn – they were beaming with joy all morning! The water was clear, there was a fair amount of shade, and they were confident to explore because they could both touch their feet to the sandy bottom in most places.  The rocks along the falls were made from a richly colored red sandstone, which fascinated Lake, and he decided to collect ten “magic pebbles” of different colors – it was quite a collection ranging from quartz to orange to deep red, though I don’t think the collection left the park in the end.  The other major activity at Twin Falls was catching tadpoles.  This it turns out was very easy for the boys, and each time they caught one they ran to show us, before returning the tadpoles safely to “their natural habitat.”  After about 20 catches, I began to wonder how many tadpoles were down there – or whether there was just a few unlucky slowpokes.  🙂

We decided to stay at Twin Falls through lunch and then it occurred to us: Hey, where are those guys? Did they ditch us?  We returned to Eliot Falls to find Cameron, Leif and Craig leaping off the deepest end of the waterfall over and over again.  I could NOT believe it.  Had these blokes ever heard of a spinal cord? We went over to watch and Leif explained to me that Cameron had swam down there and explored the bottom first, determined it was plenty deep for a go. They told me I had to try it, and in fact it looked awesome.  We reasoned by now they had probably jumped ten times each, so I watched them all jump in once more, and followed them in, carefully aiming for the same spot.

It was quite a rush! The fall was longer than I expected, maybe three seconds, and then I hit the clear blue water and went down, breaking my underwater fall quickly just in case.  When I bobbed up I was surrounded by the roar of the falls and the misty white foam, treading water in the center of a near circle of falls.  Definitely something I will never forget. I did a few of these and then we all beckoned Miranda over.  I’m not sure she wanted to jump, but she got right to the edge, and while contemplating it, received a quick nudge from one of our companions- who will remain nameless.  A gentle push, a yelp, and in she came!  Talk about taking the plunge!   (Jay generously declines to mention here that I approached and backed away from the edge ten times before the aforementioned nudge.)

After lunch we spent another few hours with the kiddos swimming at Twin Falls while the gents got out GoPros to chronicle their heroic leaps.  I thought about heading over for more, but Lake and Finn were having so much fun playing with us I didn’t want to miss a second.

Clearly Lake and Finn were big fans of Twin Falls

We all left together in the afternoon and continued on our journey.  After picking up Siberian Tiger at Canal Creek (now crossed for the third time), we continued down the track for a short bit, crossing the lovely Sam’s Creek, and then headed convoy-style to tackle the remainder of the track, which quickly became very rough.  Perhaps a telling sign, our next crossing was named Mistake Creek.  I don’t recall Mistake Creek itself being that difficult but perhaps it’s named so because the mistake is to keep going 🙂

On we went, crossing Mistake Creek and then heading to Cannibal Creek, where we decided to make camp and leave the last challenging crosses for the next day.  We had a blast at Cannibal Creek, the only campers there, and as the sun set, we were swimming in the beautiful clear fresh water, with our new mates, Miranda and the kids extracting  serenely light colored clay from the creek’s banks.  Later that evening we used the campfire to make clay footballs (which survived about fifteen minutes of hard play the next day), and all of us enjoyed ice cold XXXX Gold, which seems to be the beer of choice in Queensland.  As dusk approached, Miranda and Cameron went off to begin making an exquisite camp meal using the camper oven and a campfire rotisserie.  Cameron had lots of experience with camp ovens and showed us the finer points of using them while preparing a delicious meal of lamb, chicken, and freshly made damper.  Leif made his specialty as well, garlic potatoes roasted on a open fire.  It was a delicious meal for the ages!

The crossings the next morning began to get much tougher, with steep entries making it potentially treacherous for our tow bar, or worse, our camper – including one crossing that I think was unnamed – or at least wasn’t highlighted on our map-  that came up near end of the track with one of the trickiest angles of the whole trip!  We were ready for Cypress Creek, which featured a log bridge over a drop big enough to end our trip – yikes! – thanks to Vic’s 4WD class for prior log bridge practice.  The bridge is navigated with one person outside the car, carefully evaluating wheel placement as the bridge is only slightly wider that the wheels.  The spotter uses hand signals to indicate to the driver how to inch across the bridge.  Deep breaths!

Good thing we had practice on log bridges at Vic’s

The last major crossing, Nolan’s Brook, ran with deep water up to the bonnet (hood) and had a deceivingly wicked sandy bottom.  Nolan’s had bogged many a ute this season, including a little less than half of the 60 cars claimed on the Tele Track.  We would have never attempted Nolan’s on our own due to the risk that if we got bogged without speedy help, our trip might suffer an untimely end.

I should point out here that our original plan was to bypass this last portion of the track.  We had drawn a big arrow on our map, pointing towards the “chicken route” that would dodge the last several crossings.  Also written were the words NO CAMPER…  As you might guess from all the decisions we made up to this point, we ignored this caveat. We also had been wisely advised to lower our tire pressures to 15 PSI if we unwisely decided to attempt it.  For a reason, that seems far less clear in hindsight, we left our tires a bit higher.

We had been concerned about doing these challenging crossings alone with the camper, but since we were traveling with an experienced and skilled convoy – including two mechanical experts and an electrician, and we were carrying safety gear in case we got stuck – we figured she’ll be alright and gave it a go after watching two vehicles successfully navigate the crossing.  And frankly, it didn’t look nearly as bad as the stories that had been passed down the track by previous 4WDs.

We put a tarp over the front of the car and after reviewing the game plan, dropped into the crossing.  All went according to plan until it suddenly didn’t.  Cave Lion lost traction and after a quick effort to reverse and find a new path, it was clear that she was stuck.  Cave Lion and Siberian Tiger were bogged in the middle of the running water.  Ugh! 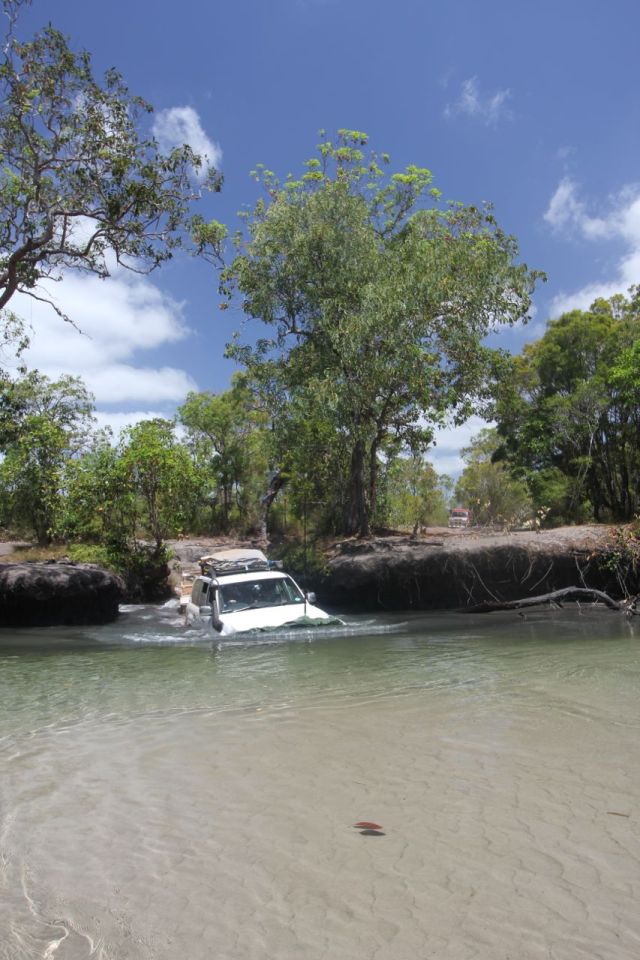 The infamous Nolan’s Brook is known for claiming many cars every year and we didn’t want Cave Lion to be one of them!

Stay tuned for the final installment!