Posted on September 9, 2014 By Miles from Brooklyn

Our favorite (small) treasure hunters’ ears perked up when we mentioned that one of the potential stops would involve looking for gems and other valuables in the ground.  When we mentioned that it would involve going to a town named Emerald, the excitement was nearly overwhelming for them.  Decision made.  We would go fossicking.  We began our fossicking efforts in search of thunder eggs.

For those of you not familiar, fossicking is essentially modern day prospecting.  (This is yet another example of a word we have encountered where I am unsure of whether it is an Aussie term or whether it is just something that was so far from my life in NYC that I have no idea what it means, but it is perfectly acceptable in American English… remind me to share some other ones with you at some point.) 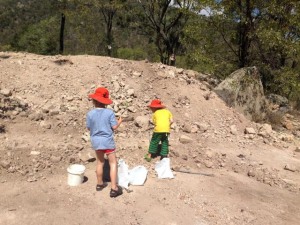 We began with a trip to Mount Hay Caravan Park outside Rockhampton, which is a location to search for Thunder Eggs. The boys and I headed off on our own as Jay had to work.  I was skeptical as I approached the entrance.  It was dusty and frankly appeared a bit worn down.  The road up was steep and unpaved and I was reviewing in my head all of the people I had heard mention this was a great spot.

When we got inside, we got a friendly welcome and the proprietor explained to the boys that the thunder eggs were formed as a result of a volcano at this spot 120 million years ago (yay dinosaur times!) and the thunder eggs were formed where gas bubbles had formed in the lava and then replaced over millions of years with minerals from flowing lava.

We were sent out to the back with pick axes in hand and a goal of finding these bubble looking rocks.  The boys took to it quickly.  It was hard to tell if the pick axe, scrub brush or the search for treasure was more exciting, but whatever it was, they enjoyed it!

We weren’t sure what we were finding. At the end of our search, the proprietor cut open each of our eggs to reveal their ancient interior. 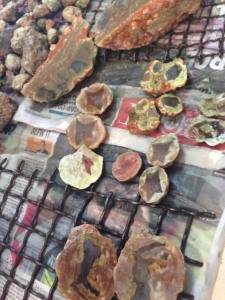 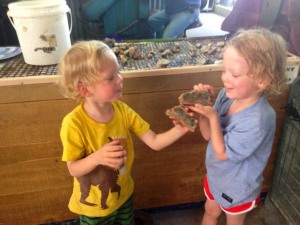 ← An Evening in Palmwoods
Ewes and Blokes →