Finny, Champion of the World

Posted on December 8, 2014 By Miles from Brooklyn

With no television and extremely limited electronic device rationing, we have had a great time reading with Lake and Finn – and watching them take it up! The kids have enjoyed looking at books on their own, and a favorite series for them is the DK Readers Star Wars and Clone Wars collections, which includes at least five levels depending on how advanced you want to be. These also cover the fighting and potentially scary aspects of Star Wars more tactfully on the lower reading levels. It’s funny because, other than knowing Poppa likes Star Wars, they have developed a surprisingly strong affinity for Star Wars with books and figures only – they haven’t seen any of the movies. Yet….

Lake and Finn have really enjoyed these DK Readers books, and Lake will get really proud when he can read a new level on his own. His favorite is called Yoda in Action. Finn’s favorite is a Spiderman DK Reader where Spidey must help cure the “Lizard Man,” a father who accidentally turns into a lizard man, but who doesn’t really want to be a villain. At this point Lake can read all of our kids early reading books alone, and I was pretty amazed to find him reading The Twits by Roald Dahl with Finn the other day, which I had read them aloud a few weeks before. I am searching my brain for good books I liked when I was young that he might enjoy and we might be able to find at a library or second hand store here.

You may ask: What are good books for reading aloud when traveling with your five year-old kids in a camper trailer around Australia? I remember having the Lion the Witch and the Wardrobe read to me at this age, but try as I might, I can’t get the kids interested. Witches are scary, and they have busted me twice trying to trick them by reading about the “Lion the Lady and the Closet.”

Surprisingly, there have been some very relevant books for our journey. Of course, a childhood favorite of mine, Alexander and the Terrible Horrible No Good Very Bad Day is perfect for packing up your family and moving to Australia. The main character is a boy – Alexander – who wants to move to Australia, where he imagines no good very bad days just don’t happen, except to his enemies: “I hope the next time you get a double-decker strawberry ice cream cone the ice cream part falls off the cone and lands in Australia.” That’s just pure gold for taking the kids to Australia, though we have yet to find the giant pile of strawberry ice cream scoops at the end of the rainbow.

And then there’s the incredible trove of Roald Dahl. I mentioned we read The Twits, during which I addressed the fact that Poppa, too, has grown a furry beard. Of course, unlike Mr. Twit, I do not store morsels of food in it for consumption later in the week (just as a snack in between meals). The climax of the Twits involves an intricate plot by crows to trick the Twits into shrinking themselves, which the boys thought was hilarious. We have seen quite a few crows traveling Australia, so it has made for good conversation. And Finny LOVES any plot that involves either shrinking the bad guys or turning them into babies.

Then there is the Dahl book tailor made for our adventure, Danny Champion of the World, where the main character lives in a caravan with his story-telling father. The boys’ favorite in this category is the BFG, and who can blame them. That was my favorite, too! 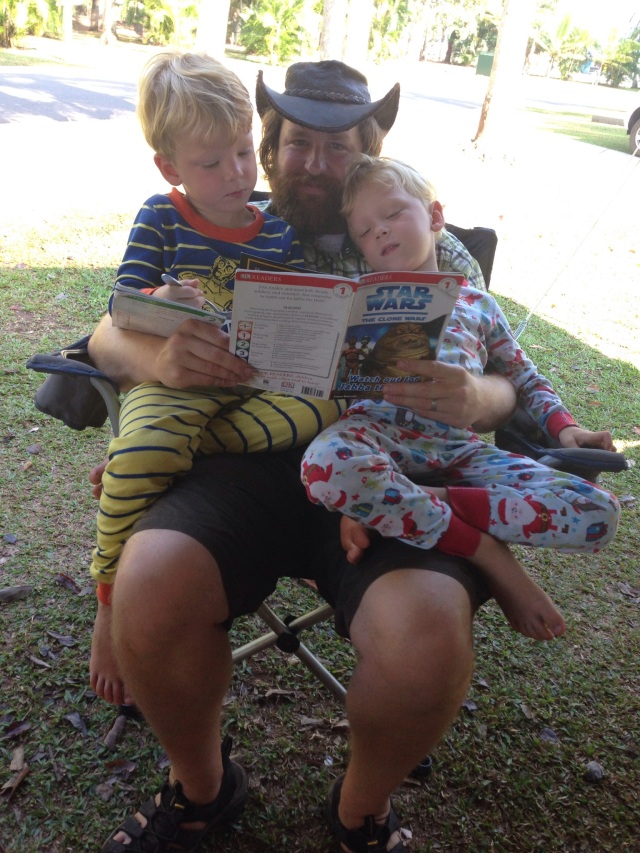 On longer driving days we have also turned to book tapes. The challenge of children’s book tapes is that as an adult you either have to be interested or be able to ignore them. I prefer to pick ones I can follow along with too so we have something else we can talk about later. At first the kids’ favorites were the Magic Tree House series, which stars Jack and Annie, young kids who travel though time using books and a bit of magic. Their favorite big boy in the world, Ben, gave them the first set of these in paperback, and the series has gone a long way. Mary Pope Osborn, the author of the Magic Tree House Series, also wrote a kids version of The Odyssey, which Lake and Finn enjoyed so much we took a chance a downloaded an older mythology book called Heroes Gods and Monsters. This was a HUGE hit. Lake enjoys listening to the list of the Greek gods and asking me what their Roman names are. Finn loves the story of Perseus, which fortunately is the longest hero tale in the book. Why Perseus? Is it the flying shoes? The dalliance with the daughters of Atlas right under his nose? The thrilling battle with the gorgon Medusa? Nope. As far as I can tell, the main reason he likes this tale is because the main character’s name is close to Percy, a pillow that is his most prized possession. He listens to the story, then reenacts the heroic part with Percy. And some days he’ll tell me- Poppa, Percy is Perseus today! 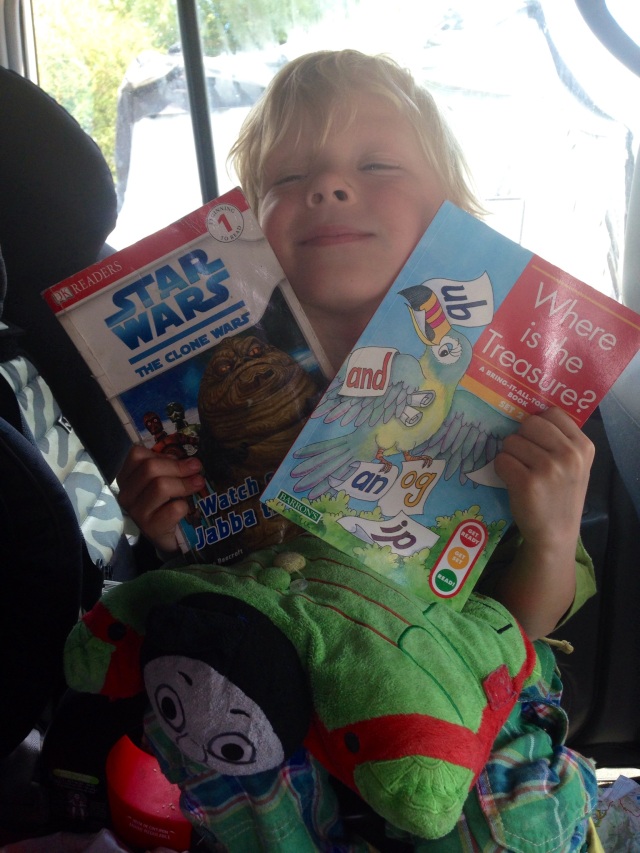 We’d love to hear from you if you have any suggestions you think our five year olds would enjoy. Please let us know by email or in the comments section at the bottom of this post!

← Which Way to Lyndhurst?
From Fastidious to Feral: An Evolution of Dirt →

3 Comments on “Finny, Champion of the World”