Posted on September 5, 2014 By Miles from Brooklyn

I had what I considered to be a cooking eureka moment the other day and thought it would be too good not to share. (Although I freely admit that the rapid cycling temperatures from hot to cold could be affecting my judgement…)

I began by sautéing an onion (I would have used two if I had them) and two carrots with a pound of ground pork and a pound and a half of ground beef to brown it. I added some red wine and after it cooked down added two cans of tomatoes, some tomato paste, chopped garlic, salt and pepper. It cooked for awhile and we had a nice dinner with the sauce over pasta.

I’m sure it sounds pretty average so far. The genius was yet to come. The next night I took some dried black beans, pinto beans and white beans and let them cook in boiling water until they were reasonably soft (maybe 45 minutes? Would have been shorter if I pre-soaked or used canned beans ). Once they were done, I added the leftover meat sauce, cumin, chili powder, another onion and a can of beer. If I had been home I would have added a dash of maple syrup and dark chocolate to deepened the flavor, but alas, not in my camping pantry. It cooked for another 30 minutes and voila perfect homemade chili. The catch was there was no herbs in the bolognese that made it too hard to convert to chili.

This seemed like a useful combo… And not just for camping. 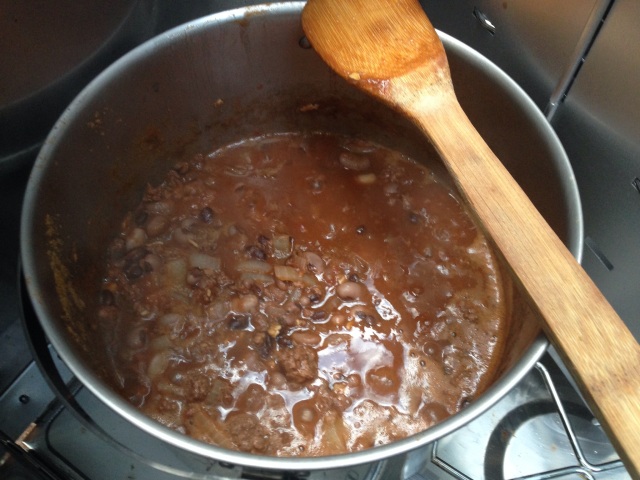 ← Caravan park fashion
The Market to End All Markets →