Swimming with the Sharks (in our heads)

I posted a video a few days ago on our Facebook page sharing our day’s adventure swimming with the whale sharks.  Whale sharks appear at the Ningaloo reef for several months every year.  They are the largest fish (and shark) in the ocean and many people travel to Exmouth to swim with these immense creatures. They grow up to 12 meters. Our video included all the visual highlights of the day (at least until our GoPro battery gave out), but as I thought about it, I realized the biggest part of the day was not represented at all.  I wanted to share a little of that story here.

The trip to swim with the whale sharks is a full day boat outing in the ocean beyond the coral reef.  Spotter planes find the gentle giants from sky (they’re that big!) and then call to the tour boats to alert them to the location and likely trajectory of the sharks. Visitors suit up in wet suits, masks, snorkels and fins and then wait in the open water hoping to be aligned just beside the path of the sharks as they swim by.  For the comfort of the whale sharks, swimmers must keep a four meter distance from the sharks and stay out of their direct path. Once the massive pectoral fins pass the group, it is permissible to swim like mad to keep up with them for several minutes.

We made the decision many weeks ago that this tour would be our big splurge on the west coast and we talked about the upcoming trip for several weeks with the boys.  Snorkeling has been a regular part of our routine as we have made our way up the coast.  We hoped all the time in the water would help our city boys feel comfortable in the water and snorkeling before our trip to Ningaloo.

The big day approached and the boys were apprehensive about swimming with the whale sharks.  There was lots of discussion about their eating habits – they eat like baleen whales, not like great white sharks.  There was pondering whether the sharks would be visible from the boat – hard to know in advance.  When asked, the boys were regularly saying “I’m staying on the boat.  I am not getting in.”  I decided to stop engaging the conversation and discouraged it with others because I didn’t want my boys feeling like they had to stubbornly defend that position even if they changed their minds at a later point.  We shared that we were excited about the trip and different pieces of information we learned about the trip to help get them interested without pushing the issue of whether they would swim with them or not.  The whale sharks had been around in the Jurassic and Cretaceous tie periods, for instance, making them real life dinosaurs (sort of). 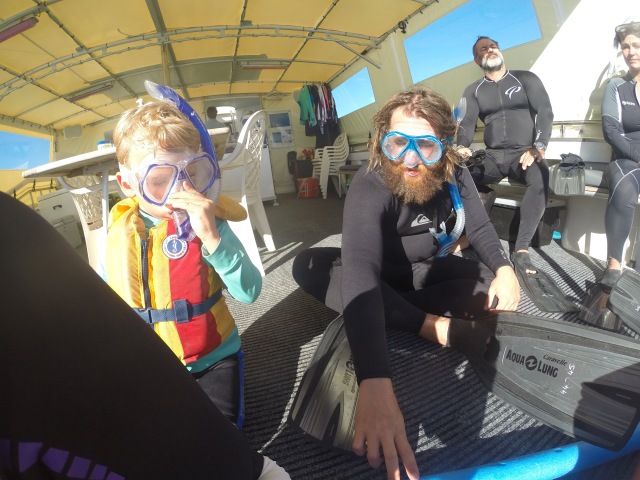 A couple of days before the trip, we met up with a family we have known for several months and their five-year old had a great time swimming with the whale sharks. He talked to the boys enthusiastically about the trip primarily focusing the big box of lollies that was given out at the end of the day. I began to feel hopeful that the boys may decide to do it.

The morning of the trip our boys suggested a reward that they thought they should earn if they swam with the whale sharks.  I have mixed feelings about bribes / rewards with kids.  On the one hand, of course, I want our kids to learn, stretch and grow themselves for good of the pursuit and not for something else.  On the other hand, it sounds a bit absurd to assume that it would be enticing to ask the boys to do something entirely unfamiliar to them (go out on a boat, swim in the deep ocean with the largest sharks in the ocean for the joy of seeing them) for an unknown benefit.  I asked them what they had in mind and “iPad time” was the request.  It seemed reasonable enough to me. A handshake each and the iPad deal was on.

We all suited up on the boat, bending ourselves into wet suits, cleaning our masks and pulling on fins.  The first stop was a chance to test out all of the snorkel equipment at the coral reef before we headed out into the deeper ocean. 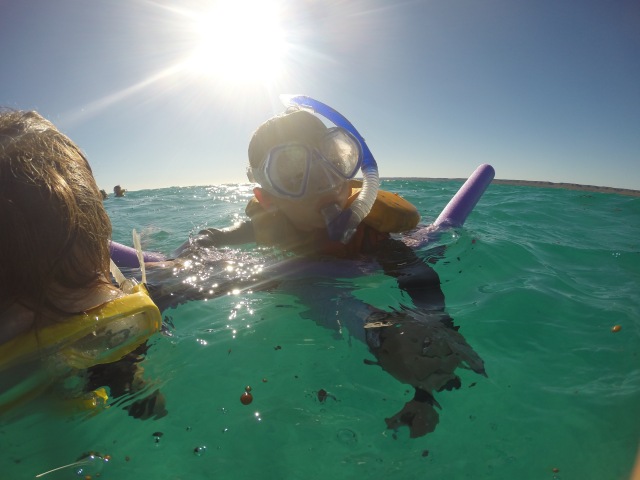 The initial entry to the water, jumping in, got Finn flustered.  The waves were rolling around the coral and the current was strong.  He got water in his mask and he had a new large scrape on his knee that burned in the salt water. This was not a good start. He wanted out instantly.  I tried for a few minutes to help him settle down, but it was clear to me that he needed to get out of the water before he would calm down.  Jay and Lake swam off to the coral while Finn and I went back to boat to get reoriented.

We skipped the rest of the coral snorkel and started talking about getting in just to see the whale shark once and not needing to do it multiple times.  Lake thought this was a great idea.  One trip in and done. Finn was still not sure that he wanted to go in again.  When we got the call to jump in with the first shark, we improved our water entry, but Finn was still overwhelmed in the water and missed looking down as the shark swam by.  We weren’t very well positioned so no one was able to swim along with it after the initial sighting.  Lake did see it and announced he would not be getting back in the water.  He had seen it, met the criteria of the reward and he was done.

The crew made the call for our next opportunity and Finn was crying on the deck.  He didn’t want to get back in, but he desperately wanted his prize. Lake had shed his PFD and was settling into a book on the deck. Sniffling Finn entered the water and I felt terribly conflicted.  Was I pushing too hard? Was this too much?  He had loved other snorkeling and sharks are his favorite animal and I was so worried about him missing out, but he was miserable.

I knew we had done all the pushing that we should do.  For the next two swims, Jay and I ventured into the water offering the opportunity to join us and met with an energetic “No” from both of them.

The next opportunity, Lake suddenly said he wanted to do it again.  We quickly got him ready and he jumped in.  We got a wonderful long swim with the shark and Lake came out of the water beaming.  He told Finn all about it and my heart was simultaneously proud for one boy and breaking for the other.  Finn looked forlorn.  I felt terrible for setting up a situation where Lake would be rewarded and Finn wouldn’t be.  What was I thinking?  How could I have not anticipated this possibility?

Amazingly, we got one more call to swim with the whale sharks.  Lake said he wanted to go again and as we pulled on his gear, Finn came over and said he wanted to come too.  I was surprised, relieved and praying that the whale shark would show up.  Lake paired up with Jay and Finn and I gave it another go together. He was much more relaxed in the water and we were perfectly positioned as all of the nine meters of whale shark came into view.  We both kicked furiously to swim along side the shark.  I picked up my head periodically to make sure Finn’s face was in the water and he was seeing this magnificent beast.  Each time I saw him mask down, kicking along.

By the time the shark swam ahead of us, I was panting and Finn was thrilled.  He loved it.  His enormous smile filled my heart as we made it back to the boat. 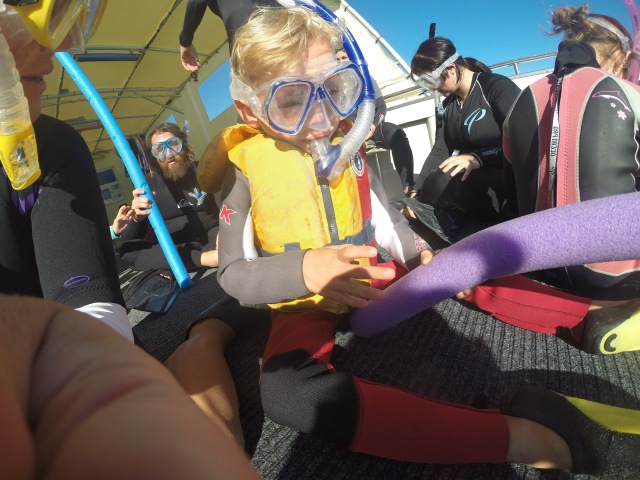 Everyone got dried off and changed for lunch and an afternoon over the coral reef.  Finn and I stood on the deck looking out at the water.  We had a lull in our conversation and he told that swimming with the whale shark was a much better prize than the iPad time.  (Although he did quickly clarify that he still wanted the iPad time.) He felt victorious and I am sure that the experience will live on for a long time in him.

I have been thinking about it a lot over the past 24 hours.  It reminded me of how many times on this trip, I have joined the kids in their fear when they are pushing their boundaries.  I have felt the moment of panic as I wonder if I am asking too much of them and setting them up for failure.    When they are given the opportunity to step outside their comfort zone, they have struggled initially.  In each of those times, the boys have risen to the occasion and surpassed my hopes and expectations.  They are teaching me a lesson in providing them the opportunity to do big, brave things and to allow them to struggle in order to feel the power of their own success.

I told Finn I was writing this post and asked him what he wanted you to know.  He said, “Tell them I loved it.  I was scared at first, but I loved it and I got the best viewing of the shark!”

4 Comments on “Swimming with the Sharks (in our heads)”