The Night that Shall Not be Spoken Of

Posted on November 22, 2014 By Miles from Brooklyn 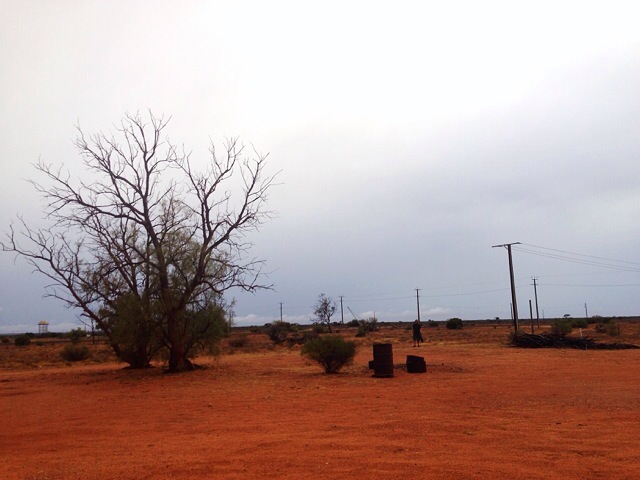 A disclaimer before I begin. No one was hurt and therefore in the grand scheme of events that can occur during our travels in the outback this was inconsequential. And yes, we are already aware of all of the deadly creatures and assorted threats possible during remote travel.

My sister, Eliza flew from Brooklyn to travel with us for three weeks. We were incredibly excited to see her and eager to give her a taste of our travel experience.

After a day picking her up and getting organized in Adelaide we headed northwest to show her a bit of the desert before heading to the beach.

We settled on an evening in Kingoonya, which is about 40 kms off the Sturt Highway and positioned us to travel due south to explore the Eyre Peninsula. It was evident after a long day in the car that this was not her idea of a vacation. Packed car. Long driving days. Long stretches of nothing but desert scrub. After driving all day, we pulled up off a dirt road to a camp site. I was enthusiastic about the flushing toilets, but apparently the otherwise barren landscape didn’t translate to a great find.

We cracked open our cold beers in the 100 degree F (40 degree C) weather to discuss the days ahead. I was busy worrying that we had gone too far afield and the camping was a bit rough. I was reminded that our adventure is not everyone’s idea of fun. After a bit, we all settled in and I was starting to gain confidence that the plan was OK.

We were all sitting around in our camp chairs waiting for our curried lentils from Smitten Kitchen (try this recipe… It’s fantastic!!) to finish cooking when a I spied a slithery brown friend approaching our camp. Like any experienced camper, I stood up on my chair and screamed “SNAKE!”

Before I tell the rest of the story, I must disclose a couple of things. First, I hate snakes. I have been terrified of them for as long as I can remember. My memory of my first nightmare of my life was snakes in the desert. In the weeks leading up to our departure, all of my anxiety was manifest in dreams where snakes appeared at my campsite. It’s a phobia. I get it. I’m not afraid of bugs. I am terrified of snakes. The second important thing for you to know is that it is relatively rare to see snakes. In the last 4 months on the road, we have only seen 3 snakes and 2 of them were from the car (though to be fair – one was a python that stretched across the length of the road- yikes!) On the whole, snakes aren’t interested in people and if you aren’t looking for them, they’re relatively easy to avoid.

So here we are. I’m standing on my chair. Liza is on her chair as is Finn, and Lake is watching the snake. I have tossed Jay the headlamp and asked him to track the snake to ensure that the snake continues it’s travels beyond our trailer and into the night. As we are eagerly awaiting confirmation that the first snake has departed, one of the boys screams “another one!”

The next several minutes unfold as only a nightmare can. One snake, then another one – longer! THEN ANOTHER! (Jay: they were clearly being drawn to the sweet smell of lentils wafting softly over the red gravel). So, now we have 5 snakes slithering amidst our campsite. I am pondering what level of stress could actually lead to my death on the spot. As the seventh snake twirled around her blue Dune camper chair, Miranda expires…..

But the saving grace that keeps me breathing is the overwhelming guilt I feel for putting my sister in this situation. Somehow the competing anxieties are offsetting each other enough to sustain my erratically beating heart. In the lead up to her visit, I repeatedly offered that any fear of encountering any of the awful Australian critters was theoretical but irrelevant possibility. Joke is on me. Luckily the boys are calmly observing and noting aloud the paths of the various reptilian visitors. One passed under Lake’s chair, for example.

I try inadequately to suggest this is an unusual occurrence as Jay whisks the kids into our tent. Liza and I scurry behind taking as few steps as possible to reach our canvas safe house. She announces she will not be sleeping in her separate tent tonight, as we see a brown fiend unfurl from beneath her tent fly.

Jay brings a table and dinner into the tent and we all try to settle down to have a semi normal dinner. (Our hero!) We are shocked and wondering how we would handle needing to use the facilities during the night. I found myself wishing we had alcohol in more concentrated forms than beer! The dinner turned out quite well and our excited discussions of the snakes were intermingled with exclamations of how good our dinner tasted. We really are a food loving family.

So we all tucked in for the night a little after 10PM. I was just drifting off to sleep as the wind kicked up. I listened and initially felt disappointed it would be such a windy night. The canvas can be a bit noisy in the wind and it doesn’t always lend itself to the best night’s sleep. Oh, how wrong I was to worry about that!

Over the next several minutes the wind went from annoyingly loud to exceedingly concerning. The canvas buckling in on us as the wind raged. By this time Finn is shouting “Mommy, what’s happening?!?!” And the adults are casting worried glances at each other. I remembered we were under a tree and decided immediately that we needed to get the kids out of the tent and into the car. (I know this is why you don’t set up a tent under trees… It was just SO hot…)

Liza and I each grabbed a kid as Jay furiously tried to close up our camper. The winds were so strong it was hard to get to the car. All of our items that had been left outside were now strewn about. We made it inside the car and the world quieted just a bit. I realized we needed to unhitch the trailer from the car so I could drive away from the trees.

Jay and I were standing next to each other, trying in vain to shout over the winds with the pelting sand stinging our skin. The pin in the hitch was jammed! It really felt like we were in a bad movie at this stage. Who would even believe this absurdist plot twist. We finally get it free. I jump in the car, drive away from the trees and position our high beams on the trailer as Jay continues to try to close the camper trailer. Liza and I are back and forth from the car trying to help and feeling woefully inadequate against the elements.

Then the skies open up and the rains begin. The torrential kind. (Now I need to take a moment here to share some relevant info about heavy rain that may not be apparent to city dwellers who dread rain because it slows down trains. Rain also floods dirt roads and erodes the surface enough to render them impassable. Most dirt tracks like the one we are on includes notes that say they are in good enough condition to drive except if it rains…”drive to conditions indeed!”)

Wow. This night just went from unbelievable to beyond absurd and now into some other stratosphere that words fail to capture the circumstance.

Jay dashes to the car having closed the camper in record time (Jay- don’t expect this kind of enthusiastic performance in the morning – adrenaline works better than coffee apparently 🙂 ) Now we are all sitting in the car and taking a collective sigh of relief.

So this is the story of how the five of us ended up sleeping in the car. We really know how to show our visitors a good time!

Once light emerged we were able to assess the damage. Our things were spread quite some distance all around. Liza’s tent was wrapped around the tree but generally we were pretty unscathed… At least among our material possessions.

With our planned track impassable, we decided on the only logical recourse. We headed straight to wine country.

(That’s Jay in the picture picking up our belongings…)

← Birds Falling from the Trees
Which Way to Lyndhurst? →

12 Comments on “The Night that Shall Not be Spoken Of”